Showing posts with the label Pasadena corruption
Show all

Letter to Lauren - an ABC reporter

Who have you got that would be interested in the case I’m really knee deep in right now?  So deep I’m now having to live in an RV that I move every week because of the death threats, and attempts, that have been made on my life since taking on this case?   It’s based out of Pasadena, California. Here’s some background on it - and it just keeps getting deeper and darker. http://sanitytodayonline.blogspot.com/2015/05/the-sound-of-music-and-pasadena.html It started when I was trying to help women in connection with “Operation Dollhouse” in Vegas in 2007.  This operation was set up in a private home - so we couldn’t do “outreach” like one can with a strip club or massage parlor.   Now these people know I do things like send in “fake” customers, and I do things like get myself hired as a maid or graphic designer because of past “stings” where I’ve done this sort of thing.   So the women in Operation Dollhouse only spoke Mandarin and only operated out of private homes.  So even …
Post a Comment
Read more

Letter to Frank Girardot of the Pasadena Star News

October 18, 2015
Dear Mr. Girardot:
I read your article about how “investigative journalism” isn’t dead yet.  No it isn’t and thank the heavens it’s not or we’re in real trouble.  I say that because back in the 1980’s - no one believed that sex trafficking was “real”.  To speak about the subject then was received about as well as someone saying Bill Cosby had raped all those women in the 1980’s.
The Telecommunications Act of 1995 hadn’t been passed yet - so when I was able to step up starting in 1987 to raise awareness this was real, it was happening to US citizens on US soil, and that we needed to change our legal and mental health system to help these victims I was heard.  We were able to run public service announcements, get interviews on major media, and I even produced a weekly public access show with survivors telling their stories.  The result?  The Trafficking Act of 2000 was passed giving us federal recognition of domestic sex trafficking.
Back in 2013 I received a call from a woman who ha…
Post a Comment
Read more

WHY MOST TRAFFICKING VICTIMS CAN NOT CALL 911 FOR HELP 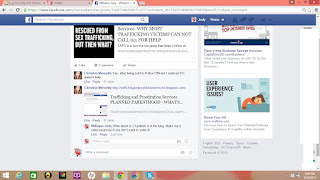 The reason I founded the modern day sex trafficking movement was because we can not call 911 for help.  I wasn't calling for more funding for homeless shelters.  I wasn't calling for more funding for cops to form bigger "task forces" (excuse me but doesn't anyone know that pimping was ALREADY AGAINST THE LAW in 1987!!!).  What I was calling for was a RESTRUCTURING of our system to acknowledge we (1) can't call the police for help, and (2) if we do then we wind up dead.

So you can put up all the billboards you want asking people to call Polaris who then in turn does WHAT?   They call CALL THE POLICE.   Or Truckers against Trafficking who DOES WHAT?  TELLS YOU TO CALL THE POLICE!  Like duh if you haven't figured out that just about everyone from 18 months old on up knows to call 911 for help, and that the REASON for the movement was because 911 DOES NOT HELP  - then you haven't got what this movement was about.