Showing posts with the label Annette Rizzolo
Show all 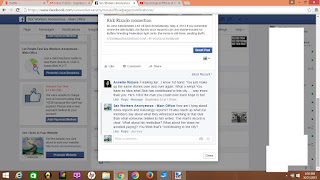 We called out to have Snoop Dogg prosecuted for pandering in Nevada where we rescued our first victim out from under his 2003 tour recently, along with a "Ban the Brothels" campaign after what happened with Lamar.  I wondered what the backlash would be.  We got it.

I got a snarky attack on our page by Annette Rizzolo for one.


Then we had a bogus review from "Sally".  The story behind her is when we received a call from a woman calling herself "Sally".  Some of you may remember we had started to post her complaint to us about how the Cupcake Girls and Hookers for Jesus refused to help her as a prostitute working in Las Vegas.

We took down that complaint from her about their groups when we realized her whole story was bogus - therefore we couldn't trust what she said about these groups.  She claimed that she was "forced to prostitute" because she "did not have an ID and couldn't get a job" to quit.  I offered to let her attend…
Post a Comment
Read more
More posts