Showing posts with the label Truckers Against Trafficking
Show all 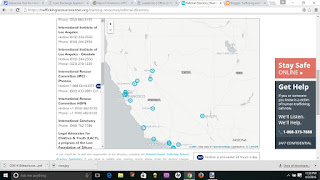 I started helping women wanting to escape the legal brothels of Nevada in 1988.  Back then it was to get away from Joe Conforte, who was the owner of the Mustang Ranch at first.  When the Shady Lady opened up - it was owned by the Hell's Angel's.

So the women wanted away from them, their pimps, or the tricks who would know they could rape these women without them calling the cops.  So guys who liked to rape women violently were being allowed to come there and do what they wanted according to what I heard knowing they wouldn't be able to call the cops about him.

Heck, one told me it was a cop who was raping her when working there!  The guy who was the cop who was supposed to pick up the HIV/AIDS test results weekly she told me was allowed to do what he wnated with the women in exchange for not taking in the test kit.   You can hear her tell the story of what she went through there here - www.blogtalkradio.com/stopsextrafficktalk/2013/07/08/hear-from-a-nevada-brothel-prost…
Post a Comment
Read more
More posts