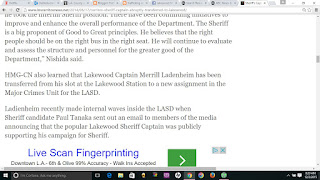 Read your article. http://www.latimes.com/local/lanow/la-me-ln-california-trafficking-task-force-20151119-story.html  I'd love to ask you this question.

First, let me introduce myself.  IF you look at the news clips at www.hightechmadam.com you'll see I was arrested in 1984 for supposedly "running a brothel".  Only think about it - a warehouse with high tech security equipment next to the police station?  What the warehouse was in reality was the first safe house for adult sex trafficking victims.  I had rescued a woman whose pimp had broken her arm and nose who was sleeping in the warehouse when the pimp tried to break in to drag her back.  He couldn't get it and he couldn't shoot up the place without the police hearing the noise (why we put it there).

So he calls in a tip that the place was a "brothel".  The woman was on probation for prostitution and answered the door in her PJ's.  Of course to the police a woman answering the do…
Post a Comment
Read more
More posts