Showing posts with the label Sweet Run
Show all

CUPCAKE GIRLS ARE "DRY DRUNKS" I.E., PROSTITUTES FOR MONEY - ISN'T THAT WHAT LYING FOR MONEY IS? 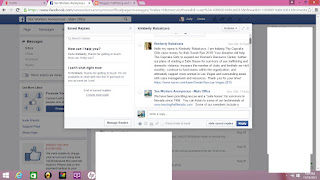 I got this in the mail today


When a group focused on the "trafficking" aspect of the sex industry - to the exclusion of the reality of what prostitution itself is I've been wondering why for a while now.  I mean why do groups like the Cupcake Girls focus everything they talk about on the trafficking side of this issue without one word about the very real prostitution side of the issue.

Well that would be then admitting that some of the time one spends in sex work is "voluntary".  That it is in fact "prostitution".  Now outsiders to sex work insist prostitution is sex for money.  No - it's not.  In fact, I argue that's more like marriage in some cases.  Don't tell me some men and women don't marry for money and trade sex for the money please.

I've also wondered why they object so strongly to the concept of "sex work" vs. "prostitution".  The reality is prostitution is a tiny fraction of the sex industry as a wh…
Post a Comment
Read more
More posts