Showing posts with the label missing people
Show all 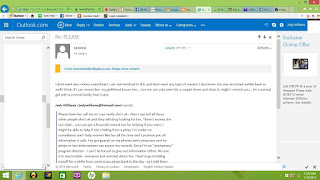 I got contacted by Lois Lee from Children of the Night.  She asked me to "keep an eye out" for Jessie Foster and forwarded me the photo and information.   I contacted the coroner who didn't know anything so that was a good sign.

I emailed the mom, Glendene Grant, and didn't get a response.  As you know, I operate the hotline and I'm in touch with people who are just coming in off prostitution.  So anyone "fresh" might have seen or heard about her.  http://jessiefoster.blogspot.com/

I asked around and no one had really heard much.  But someone said "you know I heard about a couple of escorts that have gone missing in the last few weeks" in Vegas.  Which is unusual because usually it's the street prostitutes who go missing.  I checked the newspapers and found they were right - two escorts had gone missing recently.   https://cjaye57.wordpress.com/2010/01/20/james-todd-twin-brother-of-peter-todd-the-jessica-foster-case/