Showing posts with the label AB67
Show all 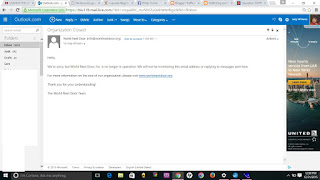 PS - when looking at media about someone you're thinking about donating money to - look for a reputable reporter or researcher writing about the person or group.  After writing the letter below I discovered that it's Operation Hope that's providing the free medical and dental work for the Cupcake Girls.   ttp://www.worldnextdoor.org/magazine/february-2014/cupcake-beginnings/     This is Operation Hope - https://www.operationhope.org /    However, the "doctor" they're referring to is the guy who runs Congo Justice.  Only I checked with the Medical Board of Nevada and he's not licensed in Nevada anyway.   When I challenged him on this - he said I "misunderstood" him and that he "worked with a doctor".    He told me he was a "doctor" when he thought I was an active prostitute and he was trying to ask me on a date.  I have the screen shots of that conversation if anyone would like to see them by the way.  Okay but to me - i
Post a Comment
Read more

December 12, 2015
Jody Williams, Founder & Director of Sex Workers Anonymous www.sexworkersanonymous.com (702) 468-4529 Telephone December 12, 2015 Re: Assembly Bill 67 Dear Legislature: For those of you who don't know who I am – I'm the founder of this modern day sex trafficking movement itself. You can verify this statement with looking at the dates on news articles I have posted up on www.hightechmadam.com The article about my arrest in 1984 for a “brothel” I was accused of running was in reality the first safe house for adults. The woman was on probation for prostitution and therefore a “known” prostitute. Her pimp had broken her arm and nose, as well as blacked her eyes. Back in 1984, domestic violence and even homeless shelters refused to admit prostitutes. Because Los Angeles was experiencing what is now known to be a record number of violence and murder against prostitutes, while everyone was shutting the door on helping them because they were considere
Post a Comment
Read more
More posts