Showing posts with the label Dream Catchers documentary
Show all

IMPERSONATION TO SLANDER AND DEFAME 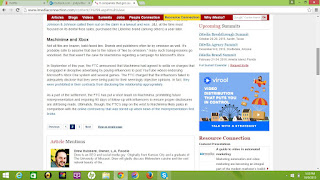 Think it doesn't happen?  I've said that I've had people set up fake Facebook accounts pretending to be me - who then have used that position to spread false representations of me online.  People think it "can't happen".  Well it does.  Read about just such a case here at http://www.nbcnews.com/id/45067276/ns/technology_and_science-security/t/facebook-case-tests-identity-theft-laws/#.Vh3KuvlViko

In New Jersey anyway - it seems its' not illegal.  No preceding cases have already been decided declaring it's illegal.  Meaning essentially yes - someone can set up an account that appears to be you, or the group you founded, and run that account and your reputation right.

I've talked about how the "real Kamylla" told me she was not posting those statements online bashing me.  I have text messages where she says she (1) does not have a computer, (2) she does not have internet connection, and (3) she was also sick at the time - all meaning that …
Post a Comment
Read more
More posts