Showing posts with the label Rental car recalls
Show all

LETTER TO DAN SCHULMAN OF PAYPAL 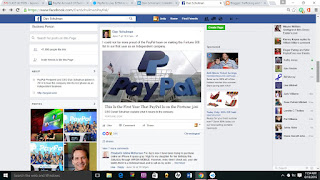 I posted this under Dan Schulman's page here as a comment to reach him since he has no way to message him directly:
Which isn't going to last long with what you're company has been up to lately. We have the class action lawsuit for $25 million you lost for improperly handling people's accounts. http://www.usatoday.com/story/money/2015/05/19/pay-pal-cfpb-penalties/27579087/ Then there's the news that hit CBS you're forcing people to pay for stolen items. http://losangeles.cbslocal.com/2016/03/28/paypal-accused-of-favoring-buyers-in-class-action-lawsuit/ And now we have Hertz Car Rental and your strong arming people to pay for their lives being knowingly endangered. On April 12, 2016, I rented a car from Thrifty Car rental who now belongs to Hertz. This was after a law was passed making it a CRIME to rent out a recalled car because of two deaths in an Enterprise recalled car AND a pledge was signed by these companies to Obama not to do such a thing. Thinkin…
Post a Comment
Read more
More posts