Showing posts with the label jeff sessons
Show all

SO I'M JUST BEING "PARANOID" HUH? 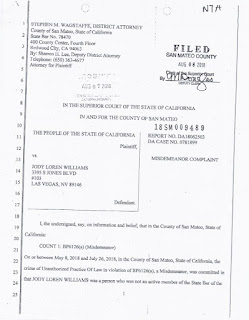 
I was home doing laundry in fact when a friend of mine called.  Because I've been impersonated so often online, and because I've also found bogus warrants have been issued against me every year now since 2009 (the year Jeane Palfrey was murdered in my opinion), I've learned to google myself once a week.  I've gotten my friends now doing it because we find all sorts of crazy things going on online about me.  Well this time they found a warrant issued for me out of San Mateo.  San Mateo was the city where the two cops came from who were involved in "Operation Dollhouse".  I was never served.  No one called me.  There was no investigation done.  I didn't get any letter.

In August of 2017, the cops illegally arrested me and also took my license plate off my car.  I was living in LA at …
Post a Comment
Read more
More posts