Showing posts with the label elle show
Show all 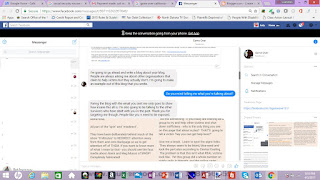 Last Sunday I was listening to Nevada Public Radio in the car.  I think the show was the BBC World news https://knpr.org/programs/bbc-world-service
On this show, I heard about a woman going by the name of "Elle Snow" who had founded a group called "Game Over".  In the show they were talking about her "training police cadets" about "how to recognize sex trafficking" in California.  Of course the only thing you could hear on the show was her talking about Backpage!  That's hilarious to me because that's NOT where truly organized trafficking criminal operations are operating out of.
I can assure you what I heard was her training the cadets about PIMPING but NOT about "trafficking" and sure as hell not about what trafficking in California right here and now is like, or certainly what I've been dealing with for over 30 years now.
Am I unique?  Am I some lone wolf?  Absolutely not.  Catch this wonderful article which appeare…
Post a Comment
Read more
More posts