Showing posts with the label Tovar & Cohen
Show all 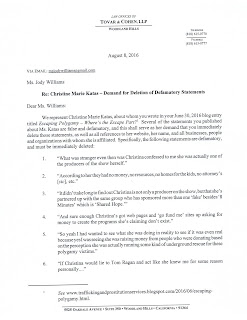 On June 30, 2016, I put up the blog post found at http://traffickingandprostitutionservices.blogspot.com/2016/06/escaping-polygamy.html
Not long after it was published, I got a Facebook email from Christine Katas which was basically her screaming at me to "take it down take it down".  The general tone was pretty demanding, and claiming she was "harmed greatly" by what I'd said in the blog.
This was not my intent.  I told her sincerely if she could point out to me where anything I had said was "untrue" then I would gladly remove it from the post, or the whole post even depending on the case she presented.
She responded with another demand to "take it down".
I don't respond well to demands so I repeated again to her that I would be more than happy to remove anything I had said which was untrue.   I asked her to please tell me what part was untrue and I would then delete this part.
Her response was to tell me "she did not lie …
Post a Comment
Read more
More posts