Showing posts with the label Tits and Sass
Show all

THE PIMP LOBBY IS A TROJAN HORSE 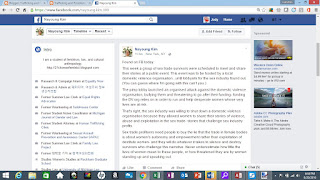 I saw this and wrote the poster: The people you're referring to as the "pimp lobby" are NOT what they appear to be. Not in my opinion anyway. There is NO ONE who has been around this field longer than me. I STARTED IT. I created the first hotline and program for sex workers to escape the industry back in 1987 when I started "Prostitutes Anonymous" now known as Sex Workers Anonymous. I was the first person in modern times to get up on a national forum and say not only was domestic sex trafficking real, that sex workers needed special help to exit the industry, and that our legal system needed to change in order to recognize that some of us were being forced, or even "sold" in the sex industry. I was the first person to propose an alternative to incarceration for prostitutes based on the idea not all of them were doing it by choice. So I know these people and I know this field. I know when things are "normal" and when they are n
Post a Comment
Read more
More posts