Showing posts with the label Jamal Khashoggi
Show all 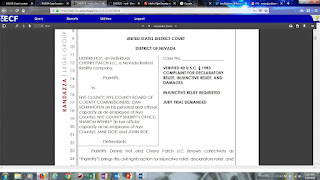 As you can see, in February of 2018, Dennis Hof filed this lawsuit against the Nye County Sheriff's office, Nye County itself and the Nye County Commissioners, as well as Jane Doe. Funny thing - I couldn't find ONE article about this lawsuit anywhere in the press.  Now with the brothels on the line on the ballot, and Dennis running for senate - do you think this lawsuit wasn't news?  Why can't I find one word about this lawsuit anywhere online? Included in the lawsuit was his claim that his first amendment rights of free speech were being violated.  To understand how this lawsuit might be the very reason why SESTA/FOSTA was passed, and what's happening within the sex industry today, legal or illegal, you would have to understand how the sex industry itself works as I do. Because I was there .  There is a as of yet UNTOLD story of what was going on in Iran Contra which was based out of LA in the 1980's, that STILL has not been touched upon
Post a Comment
Read more
More posts