HOW DOES SWOP DEFINE TRAFFICKING VS. VOLUNTARY PROSTITUTION? 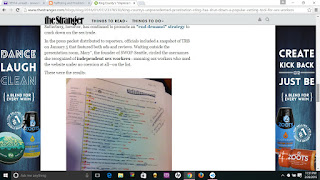 Once again something I've been saying has come to light in the press to validate my warnings.  I invite you to please read this screen shot.  http://www.thestranger.com/blogs/slog/2016/01/07/23376530/king-countys-unprecedented-prostitution-sting-has-shut-down-a-popular-vetting-tool-for-sex-workers   This screenshot clearly says that "Mary, founder of SWOP Seattle circled the names of sex workers she knows not to be victims of coercion".


I should state this as an introduction - but I not only was involved in a very complex legal case of my own in 1984 you can read about at www.hightechmadam.com but I have worked as a paralegal since 1985.  As a paralegal, I have worked on many a criminal case.  I have also been involved in many of the legal cases of our members as a paralegal.  So I've seen many many many legal proceedings with respect to prostitution, pimping, pandering, conspiracy, solicitation, supervision, money laundering - the whole gambit of things we get invo…
Post a Comment
Read more
More posts